When I first saw Petie, he was dodging LA Animal Services down on Marengo. I stood at the corner with Tommy, hoping he’d come to us, but instead he ran into a backyard, as terrified of Tommy and me as he was of animal control.

A few days later I saw Petie in Farnsworth Park. He was still fearful, so I put a bowl of kibble on the ground and stood at a safe distance giving him the space to eat. After he heartily finished the food, we did the same dance with a bowl of water.

Once I gained Petie's trust, he blossomed into an entirely different dog—playful, loving, happy. The moment he saw a tennis ball on the ground he pounced on it with a burst of joy, as if he’d discovered a long-lost friend.

Even in the shelter his spirit shined—and that did not go unnoticed. Petie was adopted over the weekend, even before we posted this video, shot by Karin Bugge. (Check out Karin's Patch article about Altadena’s animal shelter dilemma.)

Unfortunately the light-colored pittie’s story is different. She was timid from the start. I only got her into the car because of her attachment to Petie: she just followed his lead. Alone in her kennel at the shelter, she’s been emotionally shut down, unapproachable. No one has been able to lure her out of her shell.

So, Friday she gets spayed, and Saturday I pick her up and bring her home.

Honestly this is not cause for celebration. I’m not thrilled with this plan. I’m tired. I want to focus on my new house.

I want to have friends over for brunch, set up my home office, start a regular writing practice. I want to buy a couch.

But I can’t stand the thought of having led her to her death.

Perhaps Tommy will frolic in the yard with her instead of sitting at the door, pathetically waiting to get back in the house only moments after I've let him out. 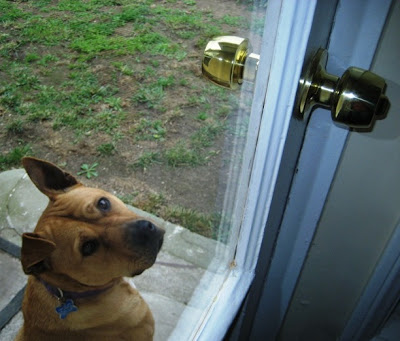 Perhaps, ultimately, she will again follow Petie's lead, and shine.

What's in a name?
As Veronica points out, a pit bull shouldn’t have the reserved nature of a lion. This girl needs a new name.

Juliette is sweet but her fate is too tragic.

My sister, Lynne, detecting a purple hue in the photo, called her Iris. I like Iris. I also like Trixie. Trixie sounds like a sweet goofball, just what I'm hoping her true nature turns out to be.

What do you think? What shall we call this gorgeous shy girl?
Posted by Susan Campisi at 11:50 PM