Santa Tommy is so popular, he even makes an appearance over on Altadena Patch. It's amazing what he'll do for a little bit of Christmas kibble cheer. 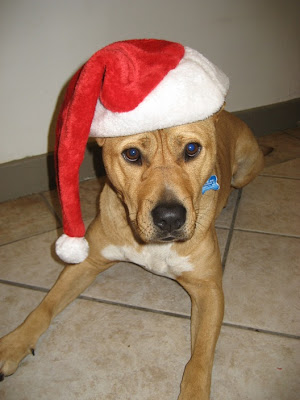 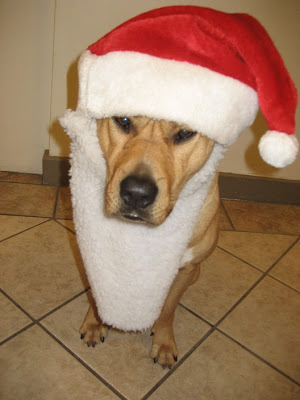 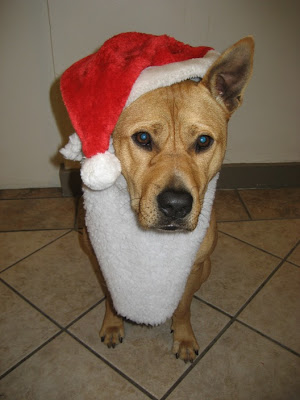 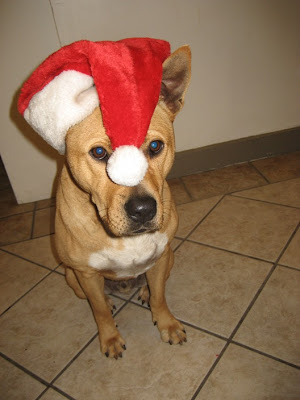 Last Monday, before the deluge, I was considering backing out of escrow because the house has a sunken backyard that floods during heavy rains, like right now.

The clock was ticking; I had just a few days left to call off the deal without losing my $10,000 deposit. A contractor had cancelled last minute and I was ready to walk away, but a couple of friends offered to check it out first.

Veronica drove with me, and Sandra would meet us at the house.

I turned onto Lake Avenue and headed up the steep hill, but as the grade increased, my car slowed to a crawl. The hipster behind me cursed behind big sunglasses. I was afraid if I pulled over, I’d lose what little momentum I had so I kept chugging.

“If we don’t make it to the house it’s a sign, and I’m pulling out of escrow.”

Veronica turned on the hazards. The hipster passed me, and we stuttered up Lake, finally turning left off the ascent. In a few blocks I pulled up behind Sandra, already parked in front of the house.

Veronica and Sandra are both artists who tackle home-improvement projects with gusto. They loved the sunken yard. They loved the (formerly) dry creek bed, the neighborhood, the house. They helped me see possibilities.

I decided to move forward with escrow.

(I wonder if they’d feel differently now after three days of torrential downpours. I don’t want to know. Too late anyway.)

We coasted home, driving down Christmas Tree Lane to enjoy the lights.

Tuesday morning as I headed out to greet the tow truck, the front door knob came off in my hand, the axle falling to the outside. I exited through the side pantry door, Tommy jumping over the pile of junk as if on an agility course.

The car got towed and a coworker picked us up. Tommy leaped into the back seat and slobbered all over her red sweater. Good thing she’s a dog person.

Later I considered the numbers on the Good Faith Estimate. I was about $20,000 short of funds for the down payment and closing costs. I panicked. Why had I thought I could afford this house?!

Veronica’s car was also out of commission. She was using her friend’s car, a white Marquis with a plush red interior they called “The Couch” because of its cushy ride.

My mind reeled over finances as I drove The Couch to the house for the sewer inspection, only to learn that the pipes were already clogged, a plumber's visit scheduled for the next day. Fortunately the inspector was an honest man: no point inspecting the sewer when he couldn't detect anything through clogged pipes.

I stopped off at Veronica's to return the keys to The Couch. Inside the house, the dogs got all excited. We heard a crash. Veronica opened the door and Babe snuck out. She jumped on me and Tommy got territorial and started humping her. I pulled him off and dropped my raincoat. Veronica came out holding a broken piece of pottery, one of her favorite vases.

With no time left to schedule the sewer inspection, I signed off on the physical contingency without it. Yikes. (I did get a general inspection.)

I spoke to my mortgage broker. They had made a mistake on the estimate; I owed $20,000 less than what they'd calculated. What a relief!

Later I couldn't find my raincoat. I called Veronica. Yep, the dogs had gotten it. Fortunately the damage was minimal, just a tear on one sleeve.

Thursday afternoon I picked up my car at European Motors, the only L.A. area mechanic I trust. I screeched out of the parking lot, unaccustomed to such a responsive clutch. Boy, was my car zippy!

That night, I went to the Arroyo Food Co-op's holiday party. They had a raffle. My adorable French neighbor picked out the names, and wouldn't you know I was the last one called out. I won a free massage.

Tomorrow I will obsess over fluctuating interest rates as I attempt to lock down my rate at the lowest possible number.

This house buying thing is nerve-wracking. It feels like a giant gamble. I might as well go to Vegas and shoot craps.

I dare not visit the house until long after the sun shines. I dare not subject myself to the flooded backyard. I must schedule that free massage.
Posted by Susan Campisi at 8:48 PM 31 comments:

Veronica's pack is a kaleidoscope of constantly shifting dogs. I can't keep up, so I like to check in now and then to remember our old pals and see who's new in the pack.

Soon after I watched her pack while she drove 40 dogs to Tucson to save their lives, 3 of her fosters got transported up to SafeHaven Humane Society in Oregon.
﻿ ﻿
﻿﻿
Remember Blondie? That was my name for her. Her rescuers called her Malibu, as she had been tossed from a Toyota Malibu truck. She was snatched up in no time from SafeHaven, a person undoubtedly falling instantly in love with her beauty and spunk just like I did.

Lily, on the right, was adopted a couple of weeks later by a very nice family with five acres of land and a couple of older kids, who Lily absolutely loved.

When I first met Shiloh, I was intimidated by him, but soon I learned his true nature—calm, smart, loving and loyal. On my last visit with him, he jumped up on the couch with me and nuzzled his face into my thigh, his fur so thick I felt like I was snuggling with a bear. We'd been worried he wouldn't get adopted but eventually he did, by a great guy who loves Shepherds and whom the SafeHaven staff really liked.

Veronica missed them dearly when they left, but knew they needed "a chance at a real family and the love they deserve. I know it is a good thing - it still breaks my heart."

I'd spent a lot of time with her summer pack; my heart ached after they left, too.

Several dogs have come and gone since then. Newest additions are Momma pit bull and her pups. Veronica had been concerned about introducing Momma to the rest of the pack (let's face it, you have to be extra cautious with pitties), but Momma was golden.

I think they look like a bad-ass gang, but I know how sweet they really are. Veronica says this photo will save Momma's life: it shows she gets along with other dogs, so the pit bull rescue in Oregon will take her in.

Even Tommy got to meet her. We were worried he'd get territorial and start a fight or be a relentless bully. But instead Momma was the pushy one. Tommy acted like an aloof older teenager with better things to do, like sit on the couch with his human. Tommy was the mature one. Imagine that.
Posted by Susan Campisi at 9:42 AM 33 comments: