It was a little over three years ago that I coaxed the stray dog into my car with a couple of burgers and drove away with him in the back seat. Customers watched as if I were crazy.

Aimless, I found my way to Catts & Doggs, where the salesclerk gave me a donated leash and harness and came out to help put it on "Butch," which is what I first called him, inspired by his playful, macho energy.

The clerk approached gingerly. Who knew how a stray pit bull would react? But Butch just smothered the guy in sloppy kisses.

The harness was snug but it would do. I picked up a friend in Silver Lake, and we returned to Beverly and Rampart to try to find Butch's human. We walked around a 'hood I would have avoided had it not been for the pit bull by my side. Only one person recognized him. Apparently he'd been wandering the streets for days when some guy took him in. The apartment manager wouldn’t have it, so he turned the dog loose on the street again. That’s the only clue to his past I ever learned.

By now it was late afternoon. I had plans for a belated birthday dinner with a few friends. I didn't want to cancel my own celebration, but I was still stuck with the pit bull. My coworker and friend Kim, an animal lover, agreed to watch him, so I drove to her place in Pasadena. As I waited outside with Butch, I saw in a flash he looked like Tommy Lee Jones. I mentioned it to Kim, who reacted the way everyone has since: she laughed, took a second look, and then exclaimed, "He really does look like Tommy Lee Jones!" The name stuck, re-enforced by the place where I picked him up a couple of hours ago:  Original Tommy's Hamburgers.

Cuidad (now Border Grill) was lovely, but I worried about what to do with Tommy. I secretly hoped Kim would keep him for the night, but, though Tommy and Buddy played relentlessly, Kim was concerned for the cats. I called a sister on the East Coast, and we discussed my options. I could keep him in my car overnight, but what if he tore the interior to shreds? I could sleep with him in the car, but how much sleep would I get? I could get a room at the Vagabond Inn, a dog-friendly hotel, but $100/night was a splurge. I decided on my last best option: sneak him into my apartment.

When I opened the car door, Tommy jumped right in as if he belonged with me. No hesitation like he'd displayed earlier in the day, no hamburgers required to coax him in.

I pulled into the apartment parking garage at midnight. Fortunately no one was around, and I managed to get to my 3rd-floor studio without being seen.

Tommy explored the apartment with gusto, sniffing every square inch. He went up to Ramona, who arched her back and hissed so he backed off. I thought it safest to separate him so I locked him in the bathroom on a makeshift bed, but he whined until I gave up and let him out. He then jumped on the bed, curled up in a tight ball in the middle of it, and fell asleep. I crawled into bed with him. Across the room, Ramona kept a watchful eye from her perch on the couch. Frieda, still young and naïve, joined us on the bed. Curious, she placed her front paws on me and peeked over my body to get a good look at the pit bull on the other side. Poor girl. She had no idea he would soon be the bane of her existence.

Tommy didn’t leave me much room. In my cramped spot, I reflected on the day: WTF?! I was in bed with a stray dog who’d been living on the streets. What had I done?!

I had a fitful night’s sleep exacerbated by Tommy’s masculine snores.

My eyes popped open when my alarm went off at 5:30 a.m. Tommy lazily got out of bed, stretched into the perfect downward-facing dog, and licked me good morning.

We snuck down to the garage and I drove a few blocks and parked. In the early morning light, I walked Tommy along the windy streets of the Franklin Hills neighborhood and planned my next step.

A few weeks later I relayed the Tommy story to a coworker. She asked what I did with him that first night and when I told her we both laughed at how funny it sounded.

Yep, we slept together that first night, but it was to be no one-night stand.
Posted by Susan Campisi at 7:38 PM 16 comments:

Tommy has boundless energy. He needs to run, and because I don't have a fenced yard, I'm always on the lookout for places to let him off leash, like...

A vacant house for rent on Lake Avenue... 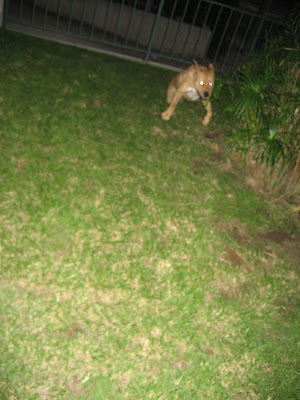 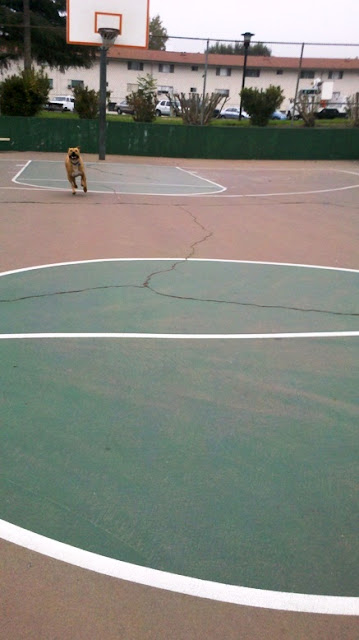 And a vacant house for sale on Holliston in Altadena... 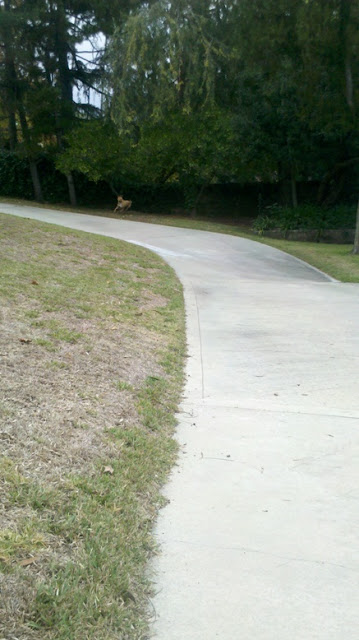 I snuck into that yard when on a walk with Veronica. She said, "You're brave." I replied, "No, I'm desperate."

Sunday I walked over three and a half hours throughout the day to burn off Tommy's excessive energy.

I'm happy to say I closed on my house today. In a couple of months I won't have to risk trespassing around town so Tommy can run. I can just open the back door. It's going to be a good year.

Update:
I have a tweaked conscience as I consider the bad news this morning. My statement that it's going to be a good year seems self-absorbed while Tucson mourns the loss of loved ones, children have been swept away in Australian floods, and a beautiful oak grove in Arcadia has been demolished. It's an odd juxtaposition: my personal good fortune against a backdrop of tragedy, of which I listed only a handful. I feel lucky and sad.
Posted by Susan Campisi at 12:14 AM 33 comments: