I could not have told the following story until your deep and abiding affection for Tommy had been established. Otherwise your first impression would have been much less favorable. 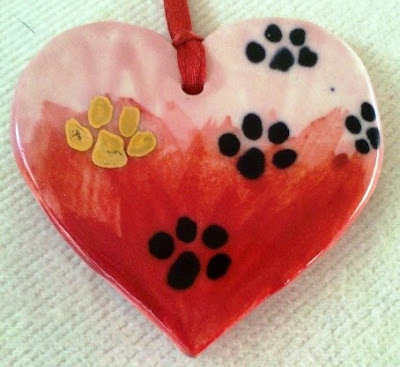 Pendant by Eekazookie
After the failed attempt to leave Tommy at the shelter, I boarded him at Gateway Animal Hospital. Boarding at Gateway was cheap, and for good reason. Tommy lived in a cage. When I’d come by after work to walk him, he’d burst out of the building and bounce down Los Feliz Boulevard, while I self-consciously tried to assume some semblance of control.

I met a woman in the waiting room who knew the pit bull breed. She became enamored with Tommy when he smothered her with sloppy kisses (“You’re really lucky,” she said). Love bites went along with those kisses, and she advised me to be firm with him. “Pit bulls need a strong hand.” Then she told me to visit Julie at Wagville.

Wagville offers cage-free day care and boarding with a pet boutique storefront. While waiting for Julie, I realized since finding Tommy I’d opened a door to a foreign world previously unknown to me. Not unlike Dorothy landing in Oz, I’d stepped into the World of Dogs, inhabited by obsessed people who spent billions of dollars a year on, and whose entire lives revolved around, their dogs. In less than a week I’d become one of them.

Julie said I could board Tommy at Wagville at a reduced rate while I looked for a place to live but only after he was neutered.

I hated the thought of him recuperating in that cage, so I put out a plea to the Echo Park Animal Alliance. Jen Byrne replied within minutes, which is remarkable. Since joining the list three years ago, I’ve seen countless dogs needing help and countless pleas for fosters. Many times those pleas go unanswered. With Jen’s quick response, I felt as if Tommy had guardian angels watching out for him.

Tommy got neutered and, with a cone around his head, went to camp out at Jen’s in Atwater Village while I looked for a new place to live. Three weeks later I moved into the duplex in Pasadena and settled in with the cats.

There’s a lot to be said about those three weeks but I’ll save that story for another time, because this story is about Valentine’s Day, the day, three years ago, that I picked up Tommy at Jen’s to start our new life together.

On the way home I stopped at Petco in Glendale. Tommy sniffed the shelves with the enthusiasm of a 2-year-old boy let loose in a candy shop. An employee laughed at Tommy’s energy and asked how old he was. Before I could answer, Tommy popped up into his face. The employee stood before me with his hand to his lip and a look of horror on his face, which I returned.

He looked at his hand, revealing the blood on his lower lip.

“He just bit me.” Disbelief with disgust mingled in his voice.

I feebly said it over and over as he, pissed–and rightly so–turned toward the employees-only area to attend to his wound.

Overwhelmed, I left the store and drove the stray pit bull home. The honeymoon was over before it had even begun. And things got worse before they got better.
Posted by Susan Campisi at 1:10 PM