A Good Yard is Hard to Find

Last week I met my realtor, Luis, at an Altadena house. As I tied Tommy to the fence, I caught a glimpse of an orange tabby sliding into the crawl space under the house. I registered a hint of trouble that I chose to ignore.


Inside I quickly walked through the house, snapped a picture of Luis and Lucas in the kitchen (if there’d been more light I would have captured Tommy bucking up in protest through that window)... 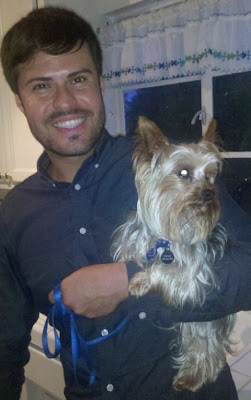 and summed up my assessment: It was a fixer and out of my price range but oh that yard!


The house was on a quarter-acre lot, and I intended to take full advantage of it.


Luis was happy to oblige. He unlocked the gate, and, when he and Lucas were safe inside again, I unhooked Tommy's snoot loop.


I love when he tears off but instead he got sidetracked by a scent, sniffing the ground like a hound. I did my version of giddyap. I clapped my hands in quick succession, shouting in staccato fashion, "Go Tommy! Go! Go! Go!" and slapped my hands on my thigh.


I'm not proud of this image but it works. Tommy shot off like a greyhound.


When he got to the other end of the yard, I clapped my hands and yelled, “Come, Tommy!” And he thundered back toward me.


Janine from J9's K9s taught that you always use the recall command in a happy, upbeat tone, and everytime your dog responds, you shower him with praise and treats. It doesn't matter how upset or pissed off you may be, whenever he responds to the recall command it's a party. Tommy learned this command well.


What a good boy, Tommy.


While I gloated over his athletic prowess and exemplary behavior, Tommy ran directly into the crawl space after that orange tabby’s scent.


I shouted, "come!" Tommy ignored me.


I ran to the crawl space entrance and tried to keep the strained panic from my voice, "Come, Tommy! Come boy."


And how was the recall command working now? As if it were swallowed by a dark hole, as if it fell on Tommy's deaf ears.


I feared Tommy would tear that cat to shreds; I feared I'd have to crawl in that dark, dirty space with god knows what down there; I feared rats and snakes and giant bugs.


I ran to the house and called again.


Tommy shot out of the crawl space, saw me standing by the door, and ran right back under the house.


I imagined the neighbors peeking out from behind a curtain shaking their heads and saying, "There goes the neighborhood."


Eventually I lured Tommy out, wrapped that snoot loop around his snout, said goodbye to Luis and Lucas and left.


Tommy was blissfully exhausted that evening.


The next day I put an offer on the house. The neighbors needn't have worried. By the end of the week I got the news that I'd been outbid. The search for a good yard continues.