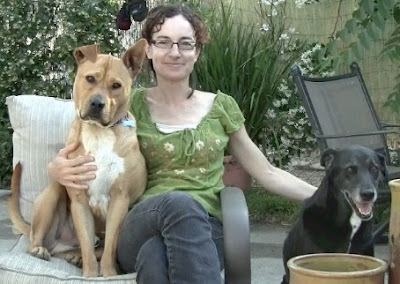 Tommy, his human, and cousin Zoe
When I found a home in Pasadena I had the great fortune of moving directly across the street from a woman who has since become my hero, Veronica Ferrantelli, founder of The Dog Rescuers. Sure, I guess you could say I saved Tommy; Veronica, on the other hand, has saved hundreds of dogs. The pack at her house is an ever-shifting kaleidoscope of dogs, rescued from high-kill shelters or some other horrific fate. Veronica fosters them until they’re adopted or transported to shelters far from LA County where they’ll have a much greater chance of finding loving homes.

Zoe is one of three permanent members of her pack.

The other night I called to see if I could stop by to pick tomatoes from her garden, an invitation she’d recently extended. “Come on by!” she said. And then I asked, “Can I bring Tommy?”

She hesitated. “Why don’t you come alone and bring Tommy by later?”

The full pack was in the yard. And so I went and picked tomatoes, without Tommy, while ten dogs wandered around the yard keeping me company. Ten dogs!

I shudder to think what would happen if Tommy’s testosterone-fueled, high-strung, bully energy were to enter the fray. And I don’t intend to find out. Before I arrive with Tommy, Veronica puts all the dogs into their respective dens in the house, except for Zoe, who has the grace and maturity to keep Tommy in his place.

Zoe is noble and kind. She is also playful. She and Tommy do a flirtatious dance together—the play bow, the run and chase. If Tommy gets too riled up, Zoe warns him with a growl and a nip, and Tommy backs off. Zoe is no pushover.

Unfortunately when I went by to pick tomatoes I forgot my camera, but here’s a picture from a few months ago that shows the house of doggie love. 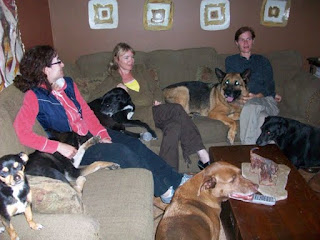 Veronica used to have two dogs: Zoe and Cooper, the handsome copper dog in the forefront. She now counts little Lola (far left) as a permanent member as well. Lucky Lola!

Notice there is no Tommy in this picture.